1Darts! Due Thursday 2-3-2011 2.Model contexts Due:2-10-2011. 3.What polynomial? Fitting Curves  Due2-28-2011 4.George and Martha's Drive. Due Thursday, 3-24 5.Some extreme problems Due Thursday 4-7 6. An initial value problem and trigonometry Due Thursday 4-28 7. Tangents to the graph of the Sine.
8 Problem on Differential Equations and Finding Areas with the Definite Integral estimation DueTBA
Back to Martin Flashman's Home Page :) 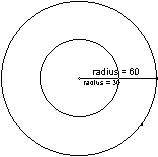 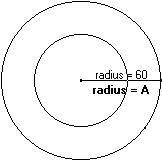 We allow a player to throw a dart 36 times and find the total score for the player as well as the average score (the total divided by 36).
Notice the average will be a number between 5 and 55.
Give a total score and an average that are likely for a player with no special skill. Discuss your reasoning and show the work leading to your proposed solution.
[These numbers are described as the expected score and the expected average for the game.]